Graceful As A Swan 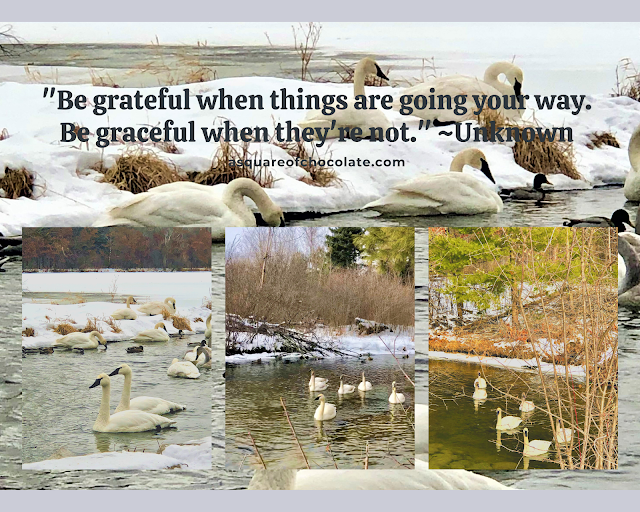 💕For the Love of Swans 💕

I'm a bird nerd dabbler, which means I am NOT a walking encyclopedia of bird knowledge, but rather I love watching bird activity as they flutter about in nature or when they arrive eagerly to feeders.

So, when I was told about the Trumpeter swans that gather at an area Minnesota lake, the anticipation of seeing these graceful swans was very alluring.

To me, swans remind me of a fairytale vision as they gracefully and elegantly glide across the water, often in pairs, which adds to their special love language.

On this day, I hiked the unfamiliar trail along the tree lined lakeshore and wasn't really sure if they'd be there or if I'd even get close enough to see them. It was when I heard their distinct trumpet sounds that I knew I was getting closer. The chilly winter air slightly took my breath away as I trekked the trail just a little quicker to follow their calls!

It was quite a sight when I finally broke through the trees and there they were. Some of the swans swam around the warmer pool of water while others rested majestically on snow-covered ice formed on the lake. I was careful not to get too close as I wasn't sure if they'd get spooked off.  However, while watching their activity, it became clear that they were used to human visitors and probably getting fed regularly.

Please DON'T feed swans and ducks bread. It's harmful to their digestive system. Other alternatives like corn, peas, oats or wildfowl pellets are best.

My swan love was tugging at my heart and I was feeling a sense of joy for this experience. Yet, the more memorable moment would present itself later. It was about a 1/2 mile further on the trail when I came upon a gentle little stream and noticed a small grouping of swans gracefully drifting towards me like a storybook picture. I stepped to the waters edge to get a better look when the leading swan shifted off course as the others followed behind and they swiftly floated directly over to me as if to say, "Hello friend!"

In my head, that's how I perceived it anyway. Of course, I said "hello" back and thanked them for greeting me. 😄 It completed the fairytale vision I had for these splendid swans and it provided a magical moment, for sure. 💖 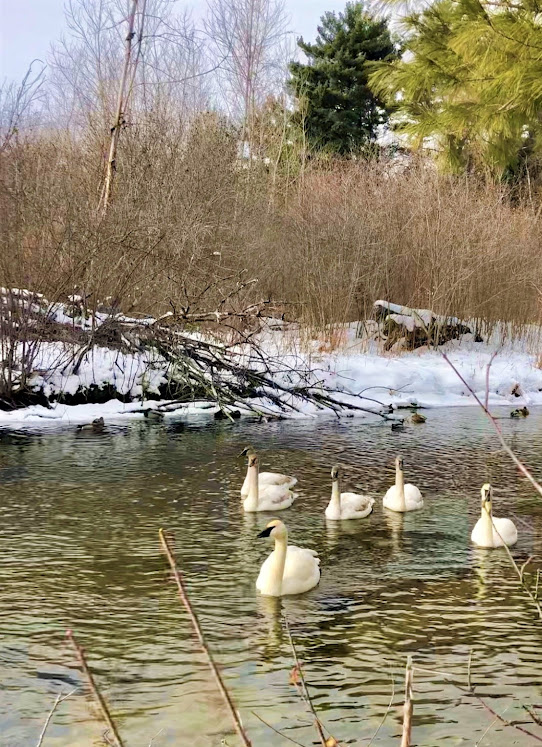 I'm very grateful for swans 🦢
"Be grateful when things are going your way.
Be graceful when they're not."

According to the Minnesota DNR there was a time the Trumpeter had nearly disappeared altogether. Between 1853-1877 European fur trappers heavily hunted them for their meat, swanskins and swan's-down. By 1877 the swan population had greatly reduced and as of 1932 only 69 swans survived in the U.S.

In the 1960s Hennepin Parks began a decades long restoration plan to reintroduce the swans to Minnesota. Much more is detailed on their restoration efforts in this MN DNR article. Over many years of extreme preservation tactics they've been able to increase the swan population.  According to the referenced article, in 2015 the DNR nongame wildlife led a survey that tallied 17,021 swans. How incredible!